Another entry in the list of projects that I work on for a bit and then abandon for a while..

Title says it all really :) This time it's a space game. I'm continuing a project I started a while ago, inspired by the enthusiasm for coop space games by the game clan I'm part of. This basically started out as a modern remake of the old classic Artemis Spaceship Bridge Simulator, but I end up taking clues from other games like Elite:Dangerous and Star Citizen.

The setting of the game is a little like this: You and your friends are crew on a rogue corvette gunship in deep uncharted territories of space. Encountering dangerous space monsters, raiding rich convoys of deep space traders, infiltrating alien factions and finding hidden treasures. 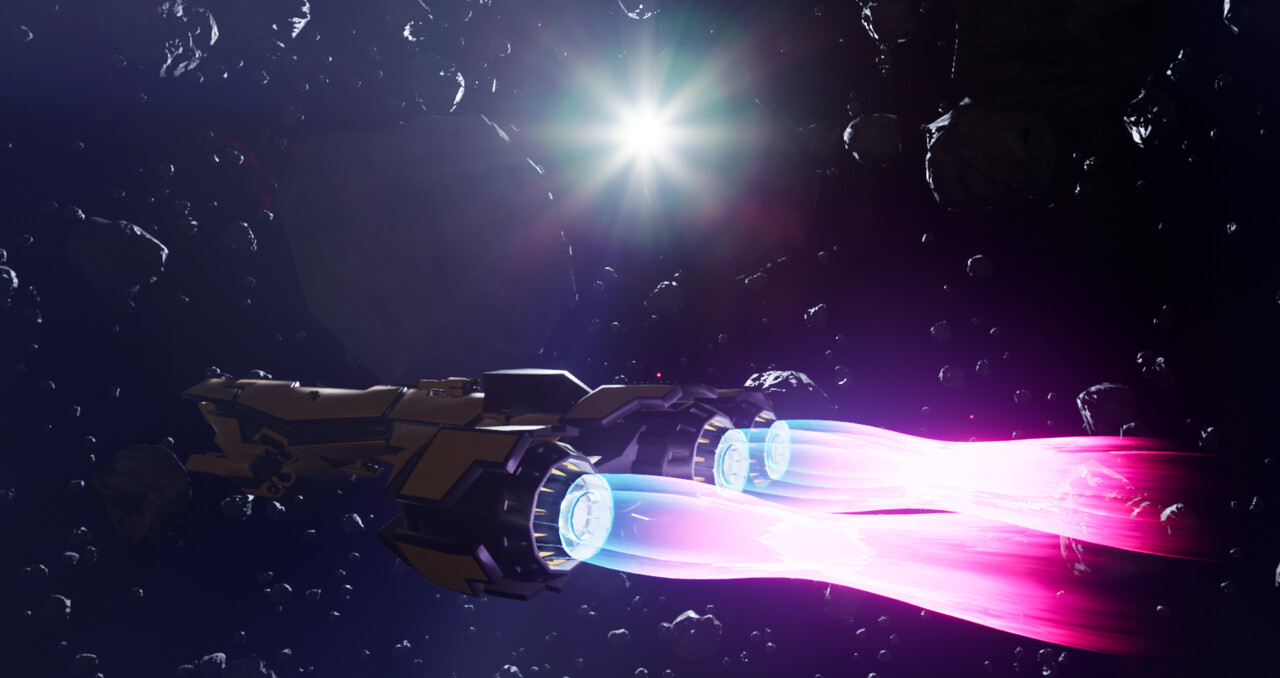 The basic design of the ship was made a while back. A few things I knew for sure I wanted to have in the design. The ship would be about 180 - 200 meters long. Guns would be appropriately sized, and I wanted it to have massive engines, like the blockade runners in Star Wars. These things drove the shape of the ship. There are a few ideas and concepts out of real live that you might be able to see in the design what makes it so aesthetically pleasing in my mind. 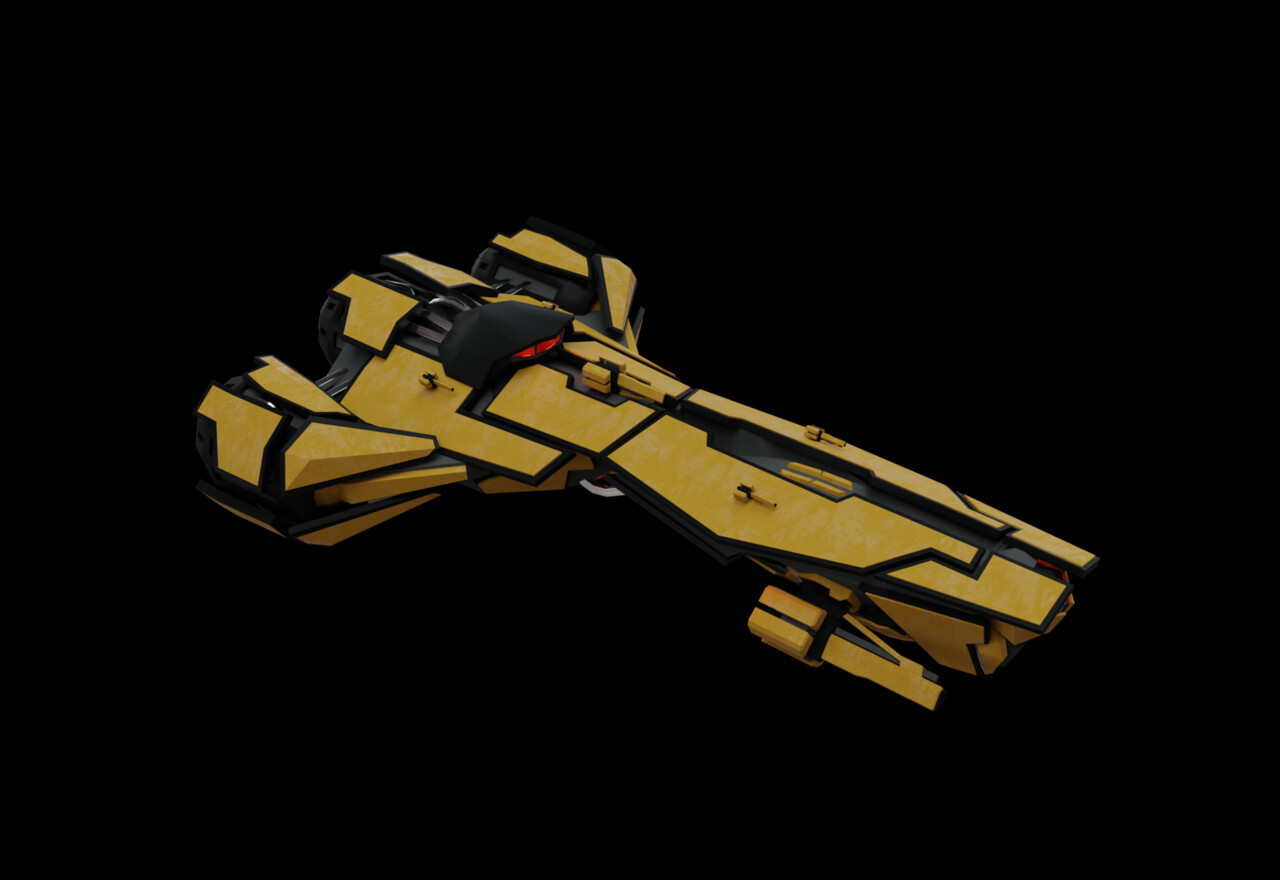 American warplanes always had a few elements that really strike me well. The cockpit of the B-17 flying fortress and the long nose of P-51 Mustang fighter were certainly an inspiration here. They give of these though, well defined shapes. Something you would ascribe to the face of a bull or a ram. Another element is that of the Farm Tractor, Big wheels in the back, slender engine in the front, cockpit on top of the wheels. You can clearly feel that all the power comes from the rear base, a solid foundation, and then the delicate steering and control more in the front. (yes i'm a farmers boy) 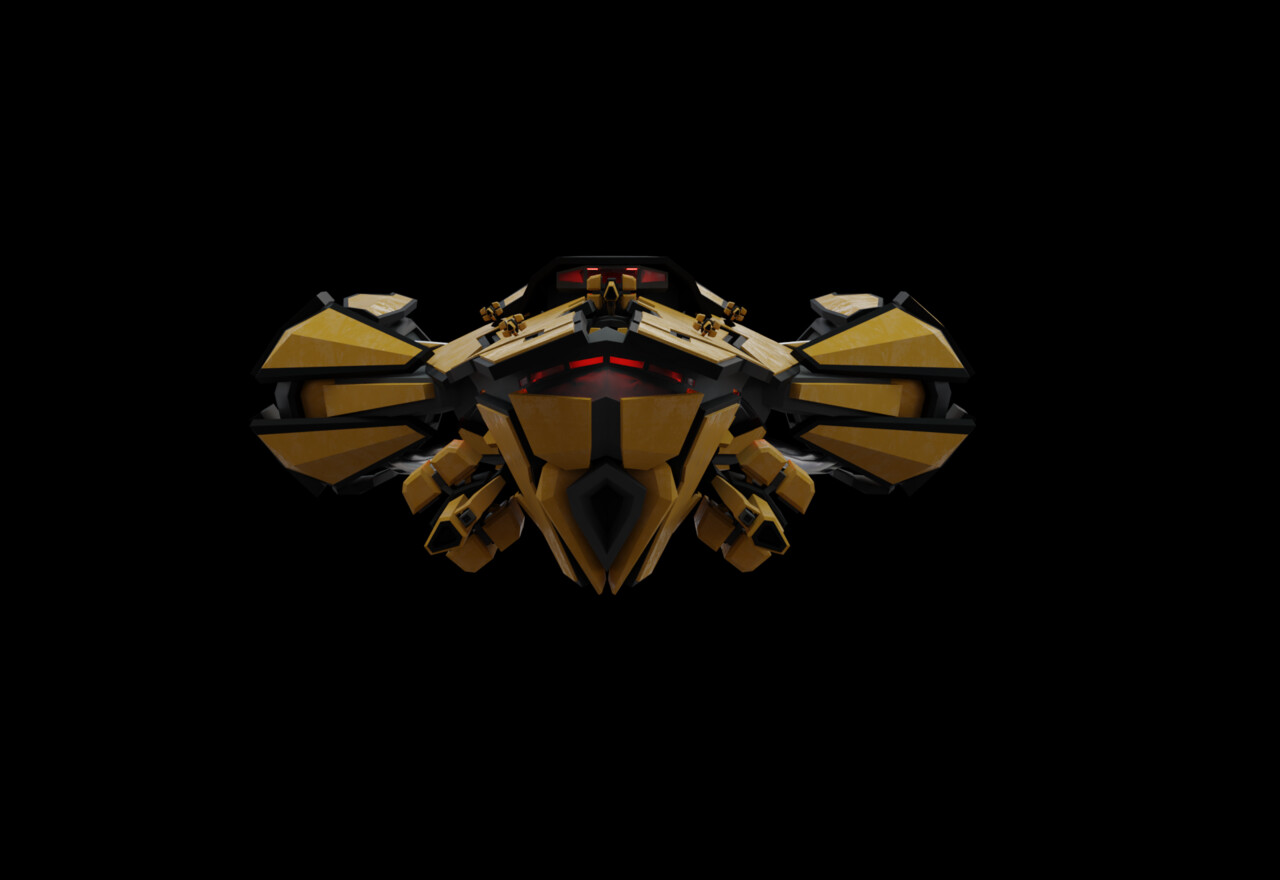 The front also has a very menacing look to it. The angles pointing towards the very expressively placed red windows. Something that just shouts "rogue" and "untrustworthy", perfect for the setting and the role of the ship in its environment. 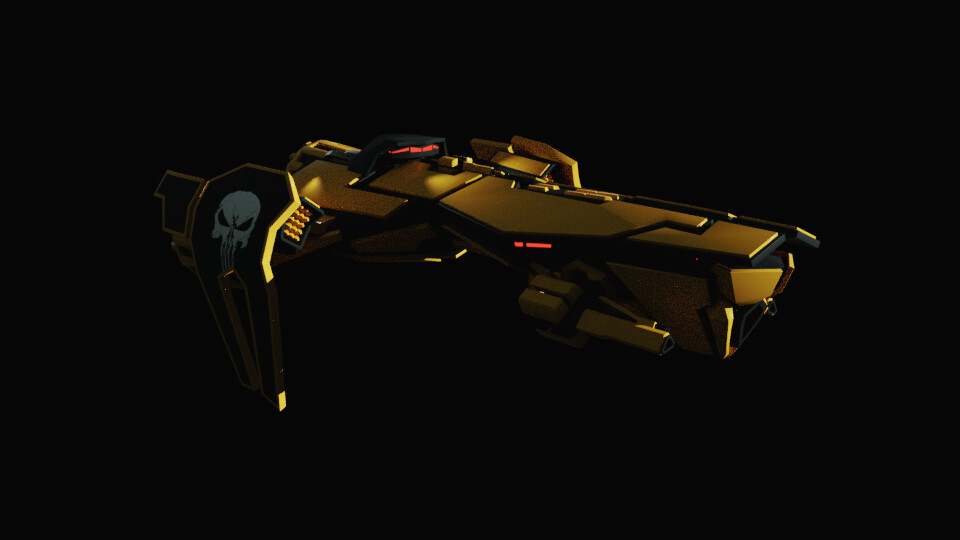 Here you can see what the earlier design looked like. A lot is still there, but there are some major changes in the overall silhouette. I was never really happy with the big blast shields on the side, And the logo was a bit overkill. Especially the missile launch boxes felt tagged on. So I changed this first when I restarted the project. 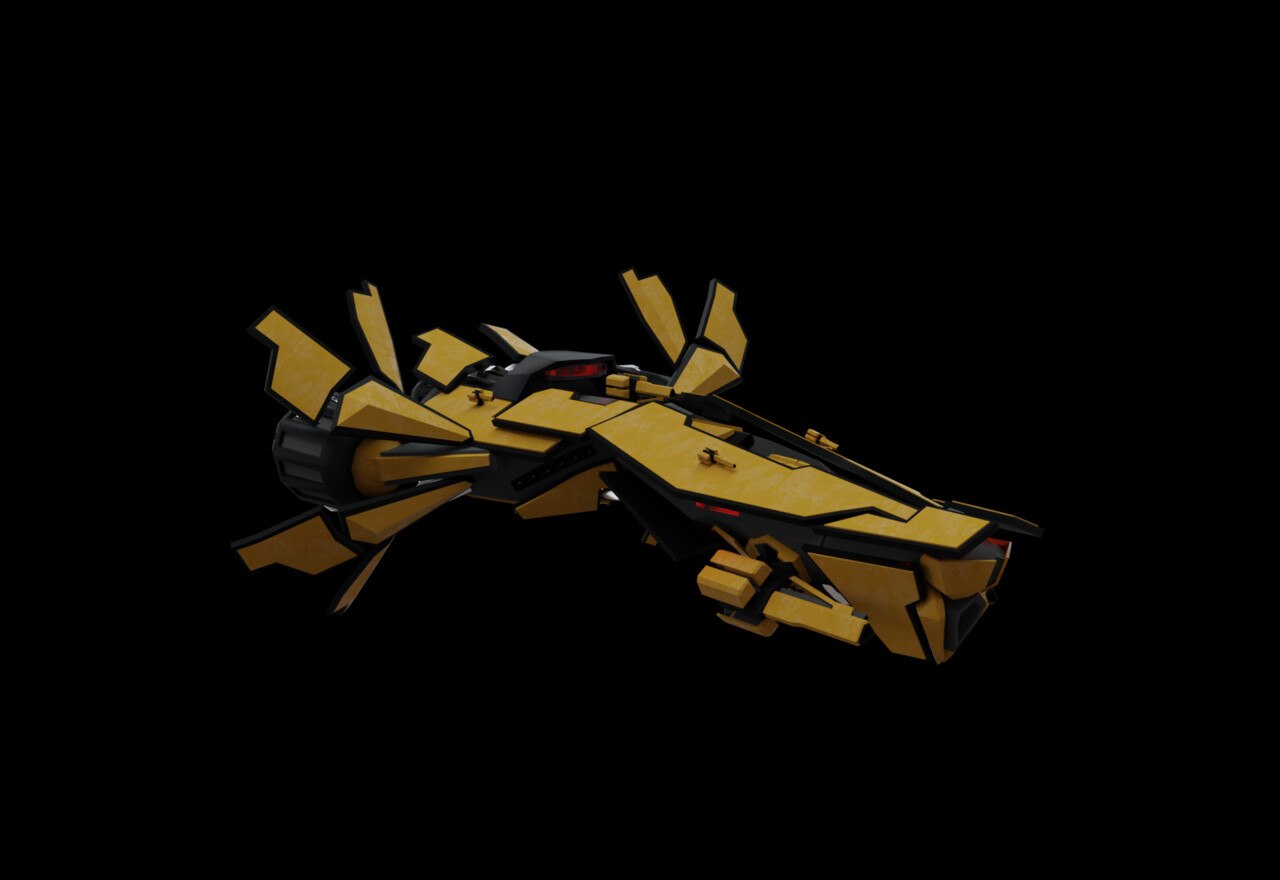 Another rule got added to my design philosophy when doing the recent redesign of my earlier work. And that was the concept of motion. I want the ship itself to feel alive, to have many moving elements allowing it to fold open and achieve various purposes, some conveniently hidden at first sight. The blast panels protecting the fragile engines turned into expandable heat radiator panels to cool the ship quickly. The nose became folding to bring more forward arms to bare at the same time. The center ridge can open up to display a central high energy cannon. 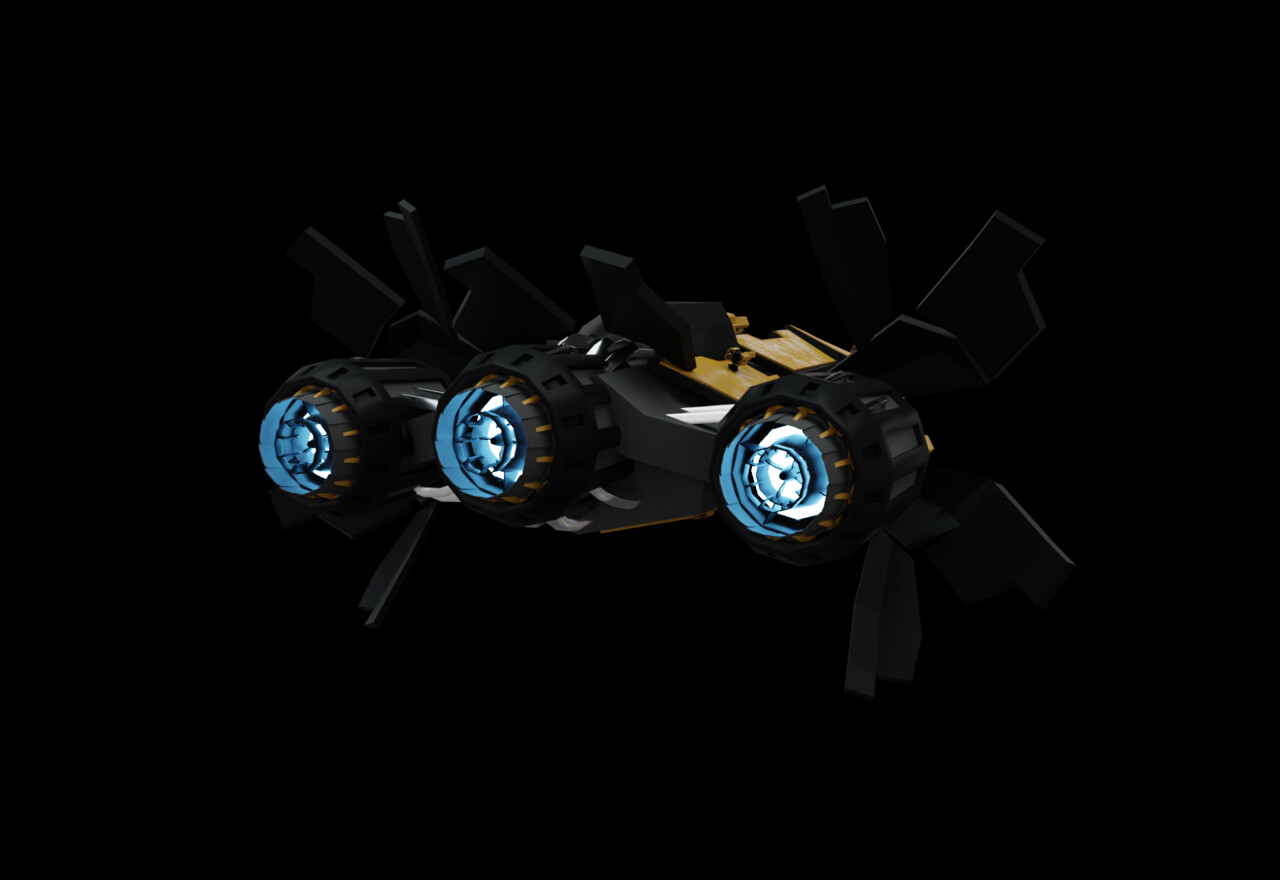 The engines were next to be tackled. In my mind, the trust vectoring that jet fighters are able to do with their variable nozzles had way more appeal than the (still awesome) rocket nozzles. After that I had to think about the exhaust. This was an interesting part, I wanted an exhaust worthy of engines this size, but watching real footage of rockets in space, most have a barely visible flame when there is no atmosphere to burn unburned fuel in the flames. So I knew I was going to break some realism rules in name of aesthetics.

I took this as a great opportunity to get to know the animated material capabilities of the Unreal Engine, and it's powerful new particle engine, Niagara. Two days of labor, and this is the result. Most of my inspiration came from the Falcon 9 Raptor engine test video from SpaceX. Together with a whole lot of explanatory videos about the ins and outs of rocket flames.

The effect is scalable with a zero-to-one value, for various levels of power output. The blew transparency but also the refraction distortion really made this effect come to life. And the pinkish end of the flames really gives a nice and original colorscheme. The full power on the right would only be used when using boost or afterburner, which wil heat up the ship as well if kept on too long. 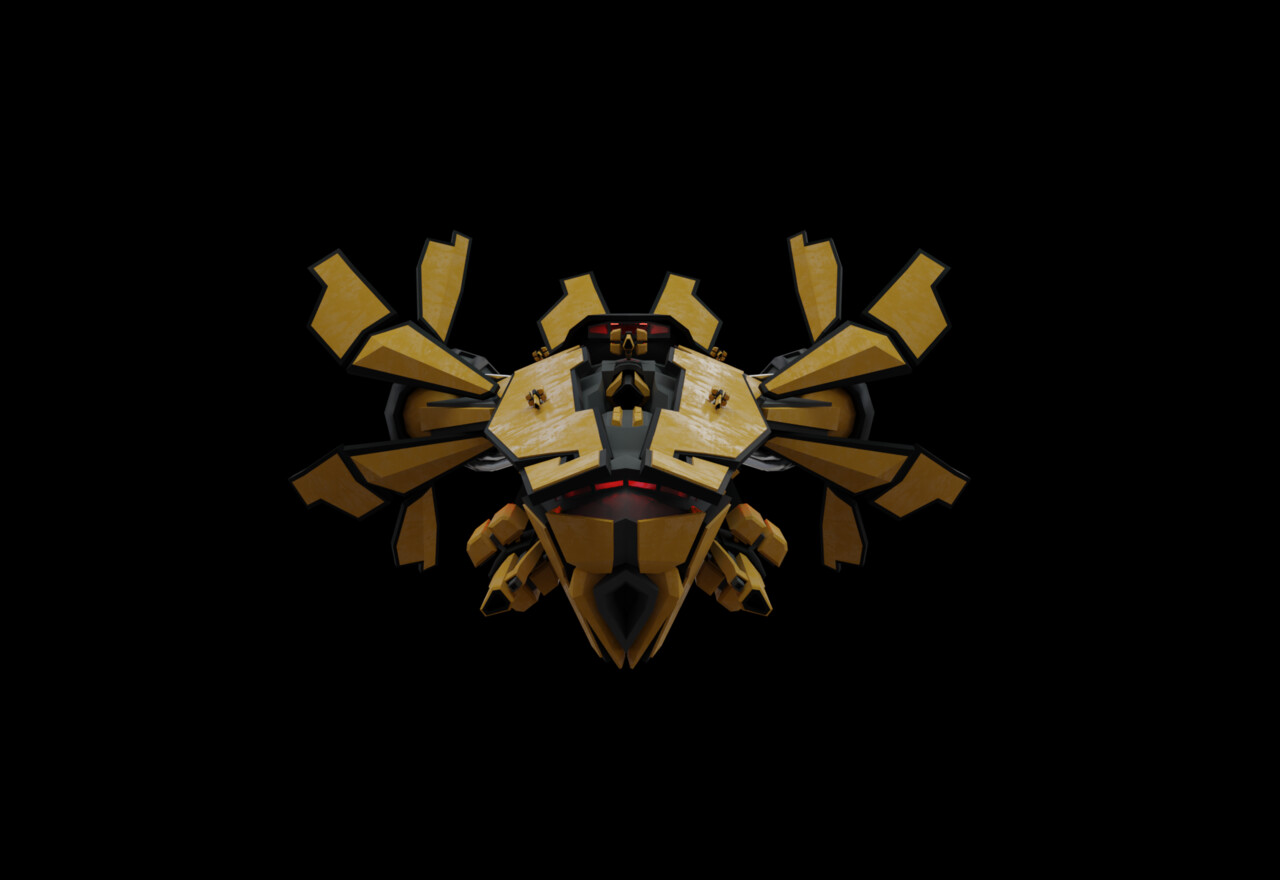 There is so much more to talk about, like the asteroids, the interior design of the ship. Even the exterior is going to be a lot more detailed in due time. The game even works in VR so it's going to be interesting how that is all going to get shape.